The Macomb County Planning & Economic Development Department is developing a new initiative, Green Macomb, to support green infrastructure efforts that strengthen the economic vitality, quality of life and environmental wellbeing of people in the county.

Historically, Macomb County was heavily forested with significant wetland areas throughout the county. Many of these forests were cleared for timber and the swamps drained to allow agricultural development of the fertile soil. Agricultural production continues in the northern portions of the county, while urban and suburban development has largely replaced agriculture throughout much of southern and central Macomb County.

The loss of wetlands in Southeast Michigan is of staggering proportions, with over 86 percent of pre-settlement wetlands lost in Macomb County alone. As these natural areas and wetlands diminish, the ecosystem services they provide – clean water, clean air, flood control, species habitat and resiliency to climatic changes through local attenuation of extreme temperature and precipitation events – are lost as well.

Southeast Michigan Council of Governments (SEMCOG) recently published the Green Infrastructure Vision for Southeast Michigan, which provides an initial inventory and analysis of local green infrastructure as well as regional policy recommendations. Through this effort, SEMCOG identified Macomb County, particularly south of the Clinton River, as a major target for urban canopy increases. This area is the most urbanized portion of Macomb County and is one of the most lacking in tree canopy in Southeast Michigan. Tree loss has been intensified by decades of Dutch elm disease and the devastation created by the emerald ash borer, as well as improvements to in-ground infrastructure.

With Macomb County’s highest population density, oldest infrastructure and some of the most highly impacted subwatersheds in Southeast Michigan, this area is in particular need of the benefits an extensive and well-managed urban forest provides, including cleaner air and water, flood control, reduction in energy usage, improvements to public health, aesthetics, increased property values and a better quality of life.

With this in mind, the first program developed through Green Macomb is the Green Macomb Urban Forest Partnership. With funding from the U.S. Forestry Service and ITC Holdings, this program will implement the regional policy to target tree canopy increases in urban areas with less than 20 percent coverage, with the aim of achieving the goal of 40 percent tree canopy for Southeast Michigan.

The development of this grant-funded project and partnership will kick off the larger Green Macomb effort and be used as a model to build support for future programming areas. 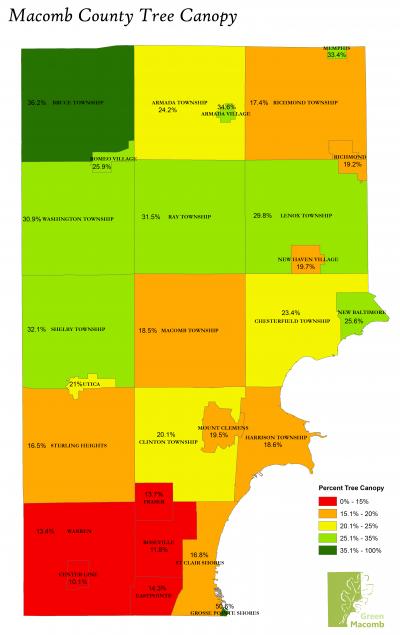